Berlin, May 17 2016 – GAMEVIL INC, a leading mobile games publisher and Cartoon Network have announced a partnership which will place the likes of the popular Adventure Time series as characters and scenarios into the mobile RPG puzzler, Dungeon Link.

Adventure Time is a widely popular animated series based on the adventurous young teen ‘Finn’ and his shapeshifting dog Jake, as they embark on exciting quests in the fantasy world of “Ooo”. The series contains comedic tones and is inspired heavily by the fantasy RPG, Dungeons and Dragons. Featured on Cartoon Network for the past 6 years, with over 230 episodes and 7 season, Adventure Time has built a cult following that transcends its episodes with a line of toys, games, apparel, and even musical projects. The collaboration will look to introduce Adventure Time’s unique personality into GAMEVIL’s RPG puzzle game, Dungeon Link.

The update brings a new map and several Adventure Time episodes into the game. Players can summon Adventure Time heroes and use their special abilities to prevail in various dungeons. (More details!)

Launched in April 2015 by KONG Studios, Dungeon Link’s addictive game play and colorful graphics have earned great success in both the domestic and international markets. This would be the first time GAMEVIL has collaborated with Cartoon Network to feature an animated series in its games.

Having well-established partnerships with other IPs such as the MLB Players Association, GAMEVIL continues to develop relationships within the industry and are working to introduce mobile games to a broader demographic. 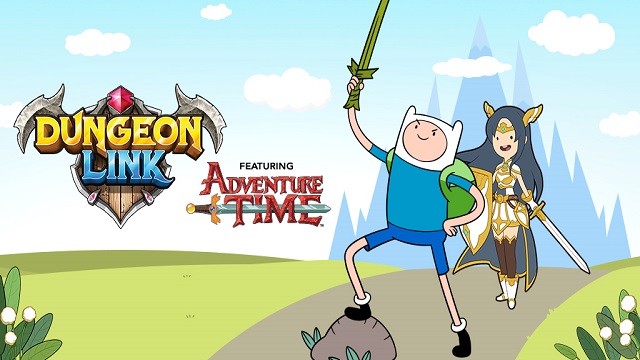